Oops! It appears that you have disabled your Javascript. In order for you to see this page as it is meant to appear, we ask that you please re-enable your Javascript!
English Site

On Friday, April 19th Junten held its usual, biannual school exchange with Rangitoto College from New Zealand. This great tradition dates back to the year 1996. It was obvious to see the strong bonds between these two fine educational institutions.

We had 24 high school students from Rangitoto participating in this event, 15 girls, 9 boys and 3 teaching staff members. It all began at the J.S. House, dividing the New Zealanders into two groups of students. When one group enjoyed experiencing tea ceremony with Ms. Kimura and the tea ceremony club, the other group were developing their calligraphy skills under the tutelage of Mr. Ebihara and the calligraphy club members. Even though Rangitoto students had other school exchanges on their long journey throughout Japan, none of them experienced these traditional crafts until their exchange with Junten Jr/Sr High School.

In the late afternoon Rangitoto students moved to the J.M. Hall to meet their respective homestay families. After the opening ceremony speeches, everyone could sit back and relax having refreshments, while the Junten Brass Band gave an inspiring musical performance. The best part was when they performed Disney classic songs which were appreciated by both cultures of Japan and New Zealand.

The Junten students were really in for a treat when next up the Rangitoto male students did a grand performance of the Maori traditional Hakka dance. It was a powerful and thrilling experience to witness the intensity of this chanting dance. Afterward, the Rangitoto female students sang their rendition of a traditional Maori song called Pokarekareana. Their quiet, melodic voices were soothing to the audience’s souls of which had the opposite effect of the previous Hakka dance. Everyone was greatly moved by this enchanting performance, to say the least.

Finally, certificates of the successful school exchange were given to the students of Rangitoto. Also, gifts from each respective school were exchanged to commemorate this grand event. 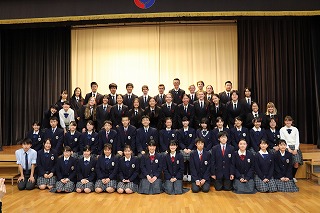 When we realized that there was still some time leftover, Rangitoto had one more performance up their sleeve. They did a performance using Diabolos (Chinese yo-yo) which originated in ancient China using spinning tops. It consists of an axle and two cups. The cups are spun using a string attached to two sticks. The Rangitoto girls did a wide variety of tricks, including tosses and various types of interaction with the sticks and string with their bodies. It was an overwhelming performance which was a perfect conclusion of the afternoon’s activities.