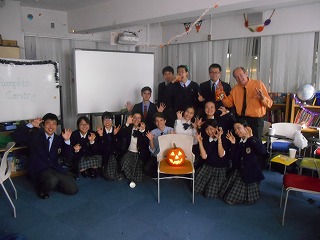 This year we had a spook-takular good time at our annual Junten Halloween Party. Due to the horrifying typhoon on Friday, October 26 and Global Week in the following week we had to postpone our Halloween party to Friday, November 8. For these reasons, we had a fewer number of students but the positive was the party had more intimacy.

We began the party by watching the terrifying ‘Nightmare Before Xmas’ movie. During the movie time, students took a new and different Halloween quiz. When their answers were correct, they could get a trick or treat chocolate. Most students attending were senior high students with the exception of a couple of juniors.

First up on our activity list was Pumpkin Bowling. The students were divided into three teams. This year we used the proper number of 10 scary, black, ghost bowling pins. It was challenging to bowl with a pumpkin because of its irregular shape. The top two teams could receive scrumptious prizes of Halloween candy.

Next up was the student’s favorite activity, Mummy Making. One member of each team was designated as the team’s mummy. Besides just wrapping white toilet paper around the mummy, students attached various frightening props to the mummy such as wigs, glasses, a green monster hand, a witch’s hat, and even a lantern, as in Jack o’ lantern. In the end, all three mummies were so exquisitely haunting that the panel of judges rewarded all 3 teams for their artistry of making ghoulish mummies. They were blood-curdling corpselike creations, to say the least.

After all that, students enjoyed snack time with drinks and refreshments, while listening to bone-chilling Halloween music. Then we played a Halloween Kahoot game on the smartboard where students had to compete with each other to answer 15 questions about the history of Halloween. The 2nd year E-class members did especially well, because of their Halloween studies they did in their Foreign Affairs class.

Meanwhile, during the snack time, creepy spiders were hidden throughout building 3 for the final activity of the day, the Spider Search. Students were happy to find the gruesome, creepy-crawly spiders so they could turn them in and receive large and small chocolates in return.

Finally, we carved a huge pumpkin into a Jack o’ lantern with a scary face. Then we put two lit candles inside of Jack and an incredible orange glow came flowing out of Jack. All the students enjoyed taking pictures with this true and blue Jack O’ lantern. Usually, every year we run out of time to do this event but this year we made the time to do it properly.

Lastly, I have to congratulate the new president of S.T.A.R.S., Nagae Rei (Rainbow), and the new vice-president Shimada Ryohei (Island) for doing such a great job on their inaugural event as the new leaders of S.T.A.R.S. We hope the next Halloween party will be just as ghastly and thrilling as this years.