On Tuesday, July 16th Junten held a school exchange with Koshu Chuzan Fuzoku Junior High School. Most of our school exchanges are done with just the senior high students. However, this time around our juniors could enjoy themselves and broaden their global experience through this great international exchange.

This school exchange was split into two parts. In the morning, the first part of the exchange was held with Junten 1st-year students and in the afternoon, the second part was held with our 3rd-year students.  This was a huge school exchange by the great number of students involved. We had 40 junior high students from China along with their 3 teachers. From Junten’s side, we had about 60 1st-year juniors in the morning and about 100 3rd-year juniors in the afternoon exchange.

In the morning, the Chinese students could observe the lessons from our Summer English Conversation Program for Junten 1st-year students. Besides observing the lessons the students could interact with each other playing introduction games and Bingo in English.

In the afternoon at 1 pm, the main part of our school exchange began in the JM Hall with the 3rd-year students. After the Opening Greeting, welcome speeches were given by both respective schools. First up on our program, was a moving performance of Yosakoi dance done by the Junten students. They spent numerous hours perfecting this dance in their preparation for the Sports Festival and it really showed in their performance. This was followed up by the Chinese Jr. H.S. Performance. Their first performance was a traditional song and dance from the Ming Dynasty. The two leading girls danced in traditional wear, which gave an exotic flair to their performance. Lastly, they did a modern medley of English music that is popular with teenagers all over the world. After that, the Closing speeches were given by both schools. The Chinese students could receive certificates from this most engaging school exchange. Group photos were taken to close out the JM hall part of our exchange.

For our final activity, students proceeded to the Rikenkan to participate in the English Task Game. Students were divided into 7 groups and each had to do an English task and then rotate to the next task at 7 different rooms in the Rikenkan. Firstly, students were expected to introduce themselves for 20 seconds in English. Next, they had to introduce their friends to others in English. After that, students described a picture and a word in English to the other students. For the final tasks, students had to recommend the best foods, places, and activities their country had to offer whether it was China or Japan. It was a great cultural exchange in which students expressed many good ideas to their counterparts from the other country.

In the end, the representative student from China summed up the day well when he said everyone involved in the school exchange had a fulfilling and worthwhile cultural experience. 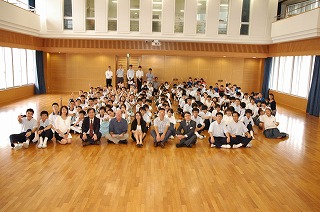