Junten students were happy to enjoy Halloween after a long period of COVID measures at Junten school. This year’s party combined “Halloween” and “Day of the Dead festival” held in Mexico, Spain, and Latin America. The party mainly consisted of E-Class senior high members along with junior high students from the returnee/advanced classes. It was great to have an even amount of senior and junior high students at this event. 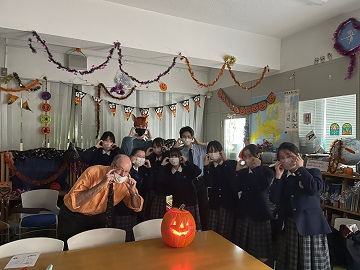 We started the party with a “Halloween Quiz” where students could receive tricks or treats after successfully answering all the tricky Halloween questions.
Our next event was the annual “Mummy Making Contest.” Students were divided into teams of five people. One member of each team was chosen to be a mummy. Then the other team members wrapped the mummy with toilet paper and used hats, glasses, and other items to decorate their mummies further. A panel of judges awarded the top two scariest mummies with Halloween treats. Students had the most amusing time creatively making their spooky mummies in their own unique ways.
After that, students made a huge circle around the E.L.C. to play “Pass the Pumpkin – Musical Chairs.” While frightening Halloween music was being played, students passed around a plastic Jack-o’-lantern filled with slips of paper, giving the students Halloween tasks to do – such as – “howl like a werewolf,” “hiss like a black cat” or “dance like Michael Jackson in Thriller.” So, when we stopped the eerie music, the student holding the Jack-o’-lantern had to pick one of the tasks from the pumpkin. No chocolate treat would be given if they were too shy to do the task. As students were eager to get their treats, all students and even juniors, participated with all their hearts. All had great fun!
Since skulls are the main image of “Day of the Dead,” we had a “Skull Painting Contest.” Students used colored markers to design very colorful skulls. The judges were amazed by the artistic skills of many of our students. The painted skulls were so fascinating that we chose five winners from this activity. Haunting music was played during the painting time.
For our final activity, we did “Spider Searching” as we did in the past. Spooky small paper “Tarantula Spiders” were hidden throughout Building Three. Students who could find the tarantula spiders turned them in for delicious Halloween chocolates. Even old spiders from last year’s Halloween party were rewarded with extra bonus chocolate.
The highlight of the evening had to be the carving of a Jack-o’-lantern out of our great, big pumpkin. This festivity was initiated by our newly elected President of S.T.A.R.S., Rick Hashimoto. A scary face was well-carved, and a lit candle was put inside the Jack-o’-lantern to make it glow bright orange. Halloween pictures were taken of the students posing with the Jack-o’-lantern in the darkness of the Halloween night. 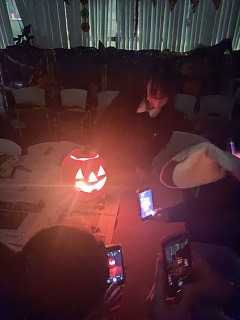 We hope next year’s Halloween party will be as thrilling and exciting as this year’s.